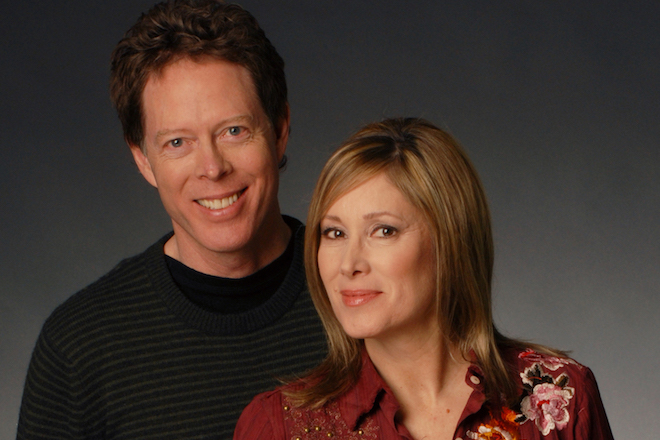 eTown host/co-founder Nick Forster is no stranger to the world of music. He began his career as a professional musician more than 30 years ago. He is a founding member of the world renowned bluegrass band, Hot Rize. He is also an accomplished record Producer, session musician and touring sideman. Nick is the leader of the highly respected eTown house band, the eTones.

Born in Beirut, Lebanon (his father worked for the State Department), Nick was raised in Upstate New York. As a teen, he played in folk and folk-rock bands. A job as a guitar repairman led him to Colorado in 1975, where he met up with Charles Sawtelle, Pete Wernick and Tim O’Brien, his future band mates in one of the most influential bands in bluegrass history, Hot Rize, which began in 1978 (and features Nick on bass, vocals, mandolin and acoustic guitar; he also serves as the band’s articulate and eloquent M.C.). Nick also is an accomplished composer, earning praise early on from Rolling Stone Magazine as “an exceptional songwriter.” Hot Rize quickly established an international reputation, releasing ten albums, touring worldwide and appearing on countless radio and television programs, including Austin City Limits, The Grand Old Opry and A Prairie Home Companion.

After earning both a Grammy nomination and the International Bluegrass Music Association’s Entertainer of the Year Award, Hot Rize disbanded in the spring of 1990 (they’ve continued to do a handful of dates each year; more recently, they’ve come together to write and record a new CD, around which they’ll be touring extensively starting in the fall of 2014).

Shortly after that, Nick was recruited to join Sam Bush, John Cowan and Laurie Lewis on a US State Department tour of Eastern Europe and Turkey. It was on that trip that Nick witnessed the unchecked environmental degradation in that part of the world and also the power of live music to draw together disparate groups of people. It inspired him to create a radio variety show, featuring a wide range of musical genres mixed with discussion about common sense stewardship and community activism. Months later, on Earth Day in 1991, eTown was born.

eTown is now one of the most successful and widely distributed radio shows in the country, carried on 300 stations every week and Podcast worldwide.

As eTown’s host, Nick nimbly walks the line between musician and radio journalist/host, playing guitar, mandolin or lap steel with world-class musical guests then switching gears to engage those artists in conversation live on stage. His warm on-air wit, stellar musicianship and clear commitment to the planet help make eTown the unique show it is today.

eTown co-host, co-founder and executive producer Helen Forster, a Minnesota native, has extensive experience both on stage and behind the scenes.

After studying and performing theatre in Minneapolis, she moved to Telluride, Colorado in her early 20’s and became a primary player there for several years as an actress, vocalist, writer and producer. She became a principal actor with two professional theater companies: SRO, an improvisational comedy troupe (for which she was also one of the main writers) modeled on Chicago’s Second City; and Plunge Players, a formal theater company led by L.A. director Paul Fagan. Helen also honed her skills as a professional vocalist during this time, singing in theatrical productions as well performing with various regional musicians. In addition, she acted in various radio theater productions; and she also co-authored three children’s musicals in collaboration with the latter’s creator, Martha Brady.

As executive producer, Helen oversees virtually all aspects of the production of each live taping and also contributes her skills as the writer and producer of the eChievement Award™. In addition, she is a gifted editor, responsible for transforming the live two-hour eTown show into the 59-minute version heard each week on the air. Helen has broad production experience in other arenas as well. For several years, she was co-owner and co-producer of the Telluride Bluegrass Festival, an annual music festival with international acclaim. During this time, she also produced and directed numerous stage productions and live “on-the-air” radio theater pieces.

Outside of eTown, Helen has performed as a vocalist on A Prairie Home Companion and in concert across the country. She is also a nationally established commercial voice-over talent.