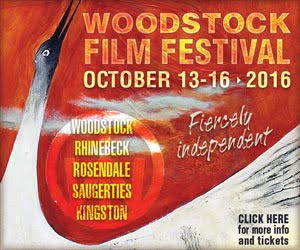 The 17th annual Woodstock Film Festival is “Fiercely Independent” screening films Oct. 13-16 in Woodstock, Saugerties, Kingston, Rosendale and Rhinebeck.
More than 130 narrative features, documentaries, shorts and animations were selected from 2,000 submissions to bring audiences the best in independent film from around the globe. While domestic politics absorbs most American viewers in an election year, the festival’s selections bring global issues back into our consciousness as a global community. Countries represented in this year’s films are Chile, China, The Faroe Islands, France, Israel, Italy, Netherlands, Palestine, South Africa, Spain, Sweden,Trinidad, Tobago, Ukraine, United Kingdom and the USA. A third of the chosen films were directed by women, and panels include Women in Film and Media, Feminism in the Middle East, and an actor’s panel of top female actors. 90% of the films in the lineup will be screened with the filmmakers and cast/subjects in attendance. The Maverick Awards Ceremony on Oct. 15 brings 500 film industry professionals to Ulster county to celebrate the best creators of independent film. The festival box office opens Sept. 21. For film descriptions and tickets, go to woodstockfilmfestival.com