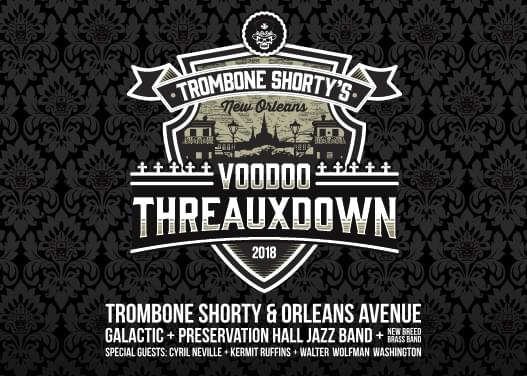 The City of New Orleans, one of America’s most unique and diverse cities, celebrates its 300th Anniversary in 2018.  To celebrate his hometown’s tricentennial, its rich cultural heritage, and the bright future of its music, Trombone Shorty has handpicked an all-star line-up of Crescent City musicians to tour the nation as “Trombone Shorty’s Voodoo Threauxdown.”

“New Orleans is the best place in the world,” says Trombone Shorty. “I want to bring people the experience of New Orleans–I always encourage people to come to the city and see what made me, what influenced me, but not everyone can come visit.  Plus there’s a lot of other musicians in the city who feel the same way, who play this music and have their own take on keeping tradition alive.  With this show, my friends and I want to spotlight New Orleans, bring joy and fun and partying to the nation, because that’s what New Orleans creates. That’s what our music is about.”

Part Jimi Hendrix, part James Brown and all New Orleans, Troy “Trombone Shorty” Andrews is the bandleader and frontman of Trombone Shorty & Orleans Avenue, a hard-edged funk band that employs brass-band beats, rock dynamics and improvisation in a jazz tradition. NPR hailed him as “New Orleans’ brightest new star in a generation,” and New York Magazine wrote that “Trombone Shorty takes in a century-plus worth of sounds—ragtime and jazz and gospel and soul and R&B and hip-hop—and attacks everything he plays with festive fervor.”

A 2011 GRAMMY Award nominee for his album Backatown (Verve), Andrews’ virtuosity and high-energy live shows have drawn unanimous raves worldwide with Rolling Stone calling him a “must-see act.” He was named to Forbes’ “30 Under 30” Class of 2016 for Music along with Selena Gomez, The Weeknd and Jon Batiste. His illustrated autobiography for young readers, Trombone Shorty (Abrams), was named a 2016 Caldecott Honor Book by the American Library Association, and a follow-up book, The Five O’Clock Band, is due in 2018.. Andrews made his feature film debut in 2015—using his trombone to voice the iconic sound of the adult characters in the animated box office smash The Peanuts Movie.  Since 2013, Trombone Shorty & Orleans Avenue have held down the closing slot on the main Acura Stage on the final Sunday of the two-weekend New Orleans Jazz and Heritage Fest.

His 2017 Blue Note Records debut Parking Lot Symphony was a 12-track tour de force produced by Chris Seefried (Fitz and the Tantrums, Andra Day) featuring 10 original songs along with covers of Allen Toussaint (“Here Come The Girls”) and The Meters (“It Ain’t No Use”). True to its title, the album contains multitudes of sound—from brass band blare and deep-groove funk to bluesy beauty and hip-hop/pop swagger—and plenty of emotion all anchored by stellar playing and the idea that, even in the toughest of times, as Shorty says, “Music brings unity.” OffBeat magazine wrote that “Parking Lot Symphony continues Trombone Shorty’s personal tradition of stunningly good musicianship, crowd-pleasing good material and just plain good fun,” adding that “Andrews keeps the music close to his heart and his hometown.”

Andrews is passing down his musical knowledge and keeping the New Orleans brass band tradition alive through his own Trombone Shorty Foundation and Music Academy, and since 2014 has worked as a “Turnaround Artist’” with the Turnaround Arts Initiative, a program that helps low-performing schools improve through intensive arts programs.