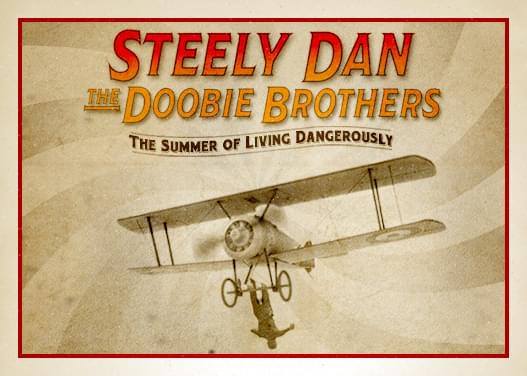 After the group disbanded in 1981, Becker and Fagen were less active throughout most of the next decade, though a cult following remained devoted to the group. Since reuniting in 1993 Steely Dan has released two albums of new material, the first of which, Two Against Nature, earned a Grammy Award for Album of the Year. They have sold more than 40 million albums worldwide and were inducted into the Rock and Roll Hall of Fame in March 2001. Becker died on September 3, 2017, leaving Fagen as the only official member.

Born out of Northern California’s chaotic, late-1960s musical stew, The Doobie Brothers’ rugged, real and authentic approach to rock and roll made them biker bar stalwarts. But their self-titled debut album in ’71 went beyond just leather and motorcycles, revealing even more musical layers; sweet three-part harmonies and rootsy, introspective, acoustic flavors. They established themselves with a breathtaking run of hits on Warner Bros. Records that tapped into a myriad of American styles. “Listen to the Music,” “Jesus is Just Alright,” “China Grove,” “Black Water,” “Rockin’ Down the Highway,” “Long Train Runnin’” and other anthemic singles confirmed their status as fine craftsman who could also rock arenas.

The Doobie Brothers were inducted into the Vocal Group Hall of Fame in 2004, have won four GRAMMY® Awards and sold more than 48 million records worldwide (including three multi-platinum, seven platinum, and 14 gold albums). Their 1976 Best of the Doobies has sold more than 12 million copies, earning rare RIAA Diamond status. Their No. 1 gold-certified singles “Black Water” (1974) and “What a Fool Believes” (1979) lead a catalog of hits that includes “Listen to the Music,” “Jesus Is Just All Right,” “Rockin’ Down the Highway,” “Long Train Runnin’,” “China Grove,” “Take Me In Your Arms,” Takin’ It to the Streets,” “Minute by Minute,” “You Belong to Me,” and “The Doctor.” In all, The Doobies have tallied five Top 10 singles and 16 Top 40 hits.