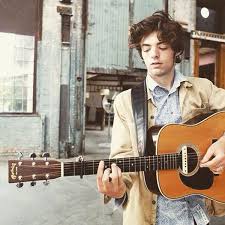 Join us for a special evening of music as we welcome singer, Lorkin O’Reilly! Born in Scotland, he immigrated to the United States in 2014 and has been making a name for himself as a commanding new songwriting talent. As a child, he was exposed to the music of his mother’s native Ireland. At 25, his songs are extremely intimate, full of depth, and artfully poetic.

He recently recorded an EP, After the Thaw, at Old Soul Studios in Catskill, NY. He is a locally-based troubadour, who plays shows regionally, in the USA, as well as in the UK and Scotland. He is signed with Team Love Records.

“He may call Hudson home, but Lorkin O’Reilly’s music exudes the Scottish terrain from whence he recently came with naught but a guitar on his back, a head full of song, and hands schooled in UK folk avatars John Martyn and Nick Drake” – Chronogram

Bring a chair or blanket with you. (In case of unsavoury weather, show will happen on the Third Floor.)