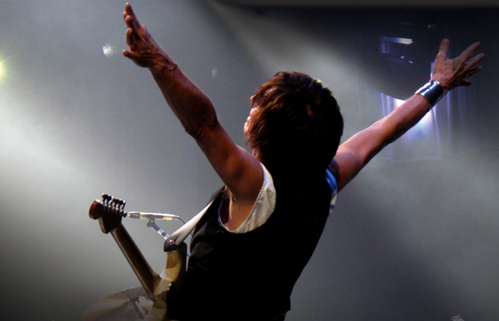 Jeff Beck has never been shy about speaking his mind through his music. For more than 50 years, the Grammy-winning guitarist has expanded rock’s sonic vocabulary with an inventive style of playing thatdefies categorization. With LOUD HAILER, Beck’sfirst new album in six years,the Rock and Roll Hall of Famershifts gears once again for analbum packed with topical lyrics that touch upon his concernsaboutthe future. Loud hailer—another name for a megaphone—is the perfect symbol for the11 tracks.“I really wanted to make a statement about some of the nasty things I see going on in the world—greed, lies, injustice —and I loved the idea of being at a rally and using this loud device to shout my point of view.”To help him write LOUD HAILER, Beck enlisted two young women —guitarist Carmen Vandenberg and singer Rosie Bones. It was a chance meeting with Vandenberg last year at a birthday party for Queen drummer Roger Taylor that eventually led to the trio’s collaboration. “She invited me to one of their shows, and I was blown away,” the guitarist recalls. “When we got together in January, I explained the subject matter I had in mind, we sat down by the fire with a crate of Prosecco and got right to it. The songs came together very quickly; five in three days.”Beck recorded most of LOUD HAILERat home and produced it with Filippo Cimatti, who alsoVandenberg and Bones. In addition to the core trio, the album also features drummer Davide Sollazzi and bassist Giovanni Pallotti, who wereboth recruited by Cimatti. The album’s roots, Beck explains, reach back to September 11, 2001. In particular, the plight of the “Jersey Girls,” four women who lost theirhusbands in the attacks and were instrumental in the creation of the 9/11 Commission.“These women wanted answers, but were given none, which I found shocking and appalling,” the guitarist says. “I told Rosieabout their fight to find the truth and she came up with ‘Ballad Of TheJersey Wives.’ That creative process repeated itself for most of the songs on the album. All credit to Rosie—she was able to bring these different ideas to life.”Becksayshe enjoyed his new role as lyrical director.“You can set the mood with an instrumental, but you can’t really tell a story. That’s not what you would expect to hear from someone who once remarked, ‘Good riddance to singers.’ But the truth is, I play better when I play off the lyrics in a song.”