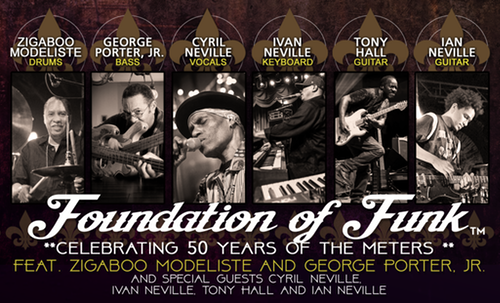 Foundation of Funk is the newest project from the legendary Original Meters’ rhythm section Zigaboo Modeliste and George Porter Jr. This latest endeavor has seen the influential duo team with select players who have carried on the funk and jam tradition, while paying homage to The Meters catalog, in a unique collaborative form. Each round of Foundation of Funk shows has featured a different cast of special guests alongside Zig and George diving into the extensive catalog of Meters’ tunes, to create a truly unique Meters experience from venue to venue.

The band initially debuted in 2015 with two very well received shows featuring Ivan Neville and Tony Hall of Dumpstaphunk, and then again for New Year’s Eve in New Orleans with a special performance alongside UK funk torch-bearers The New Mastersounds. In 2016, House of Blues hosted another Foundation of Funk with Neville and Hall, followed by a Northeast tour of the Foundation of Funk with special guests Eric Krasno and Neal Evans. In 2017 Jimmy Herring sat in, and most recently during Jazzfest April 2018, Anders Osbourn and JoJo Hermann (Widespread Panic) joined Zig and George down in New Orleans.

This particular line-up configuration which hits The Cap Theatre and Lockn is set to commemorate “5 decades of The Meters” within The 300 year anniversary of The Crescent City that spawned them. The original rhythm section, “George and Zig” are joined by New Orleans most authentic family of funk including Cyril Neville (The Meters , Neville Bros.), Ivan Neville (Dumpstaphunk, Neville Bros.), Ian Neville (Dumpstaphunk, Neville Bros,) & Tony Hall (Dumpstaphunk). This rare, New Orleans centric line-up, is set to bring “Fiyo On The Bayo” to fresh live versions of the Meters seminal catalogue, executed by the masters, and honoring 50 years of Meters funk in 2018, a year in which the original band is also set to be honored with The Grammy’s “Lifetime Achievement” Merit Award.