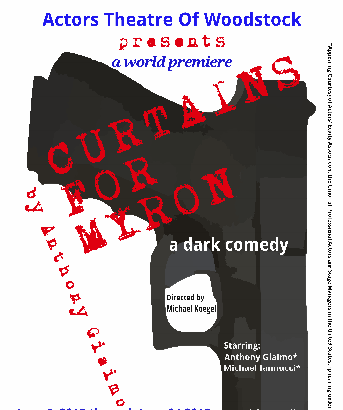 CURTAINS FOR MYRON: Starring Anthony Giaimo, Michael Iannucci, Tina Keyes and Susan Cella this dark new comedy centers around Myron, an aging Mafia gumbah wannabe and Jerry, his over the hill gay actor brother. These polar opposites humorously litigate old wrongs and cruelly open new ones. The day spirals out of control when a visit from Myron’s hooker girlfriend and his troubled daughter expose some guarded family secrets. Hounded by the police, Myron takes matters (and a semi-automatic pistol) into his own hands. Strong language +18 yrs.

Premieres on June 8, 2018 at 8PM and runs Wed-Sat at 8PM through June 23 with two Sunday matinees on June 17 and June 24 at 2PM at the Bearsville Theater in Woodstock, NY.

$35. For tickets call The Bearsville Theater Box Office at 845-679-4406 or visitbearsvilletheater.com