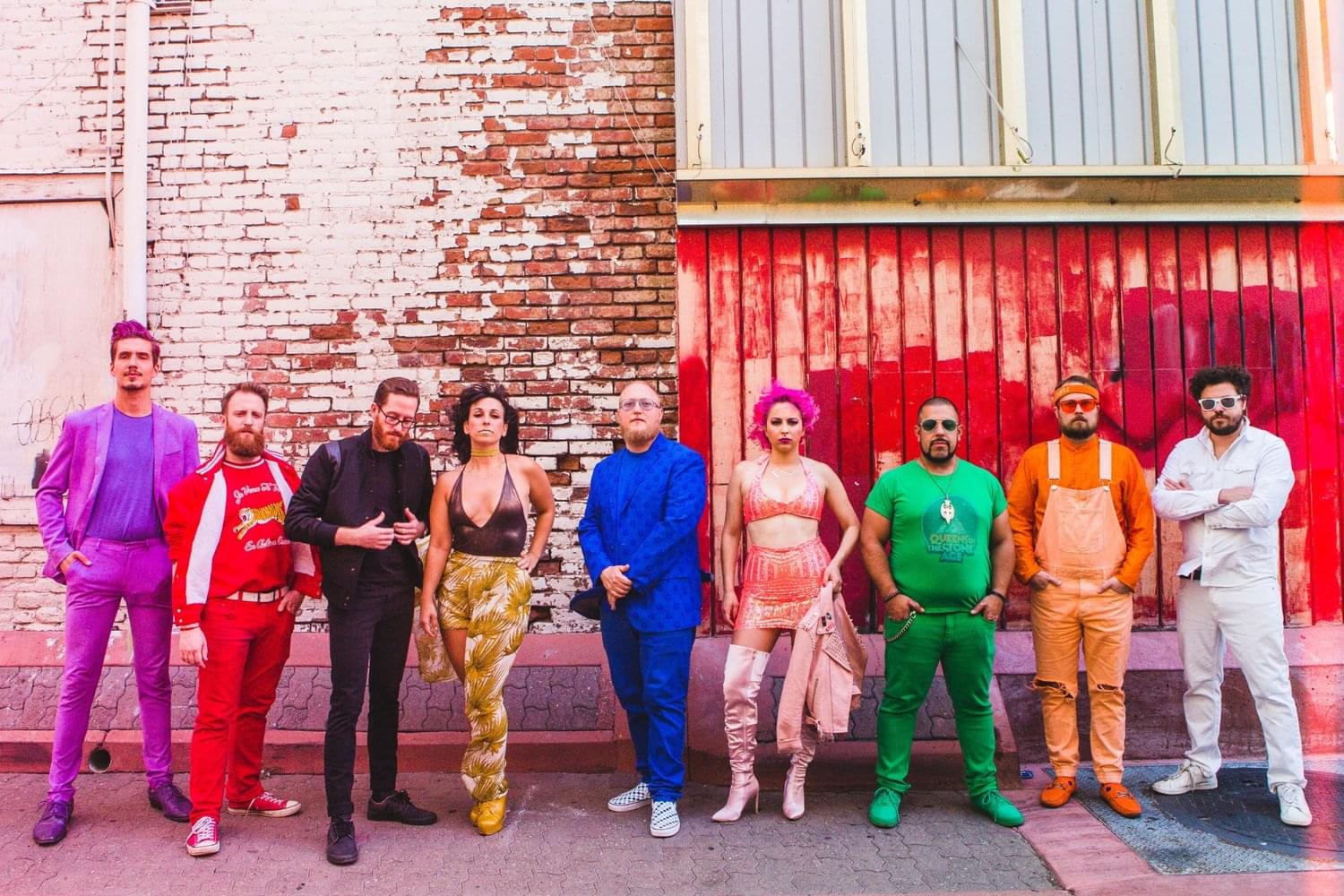 WDST is proud to welcome back TURKUAZ! These Mountain Jam veterans make their long awaited return to the Hudson Valley after after a sell out show in 2017. The 9-piece powerfunk ensemble hits BSP Kingston’s Back Room Theater on Friday April 19th.

“Turkuaz is made up of individuals, each their own shade of the color spectrum,” explains Dave. “Each person brings a signature style and embodies his or her own color. The respective auras come together to create our sound. The name itself implies that vibrancy, but it’s a different spin on turquoise. In the same way, we put a different spin on groove-oriented music by telling stories that you wouldn’t normally associate with funk.”

Since emerging in 2011 with their self-titled debut, the group have quietly animated a movement.

Most recently, 2015’s Digitonium yielded fan favorites such as “Nightswimming” and “European Festivity Nightmare” and generated over 1 million-plus cumulative streams. When it came time to commence work on Life In The City, the musicians switched up the flow and took a different approach.

“We did Digitonium in a short period of time and created a concept based on The Sword in the Stone,” says Dave. “We sifted through a lot more material for Life In The City. We threw all of the paint on the canvas. There was more collaboration in the writing. Some members who hadn’t participated before brought ideas to the table. We didn’t have anything road-mapped. In that respect, it was exploratory as far as who we are sonically. The same goes for the lyrics. Beyond the turmoil in current events and the world, I was going through some difficult challenges in my personal life. So, Life In The City is more based in reality and the experience I’ve lived in the past few years than a fantasy like the last record. The city is representative of modern life and all of these distractions we face day to day.”

In order to capture that vision, they first recorded at More Sound in Upstate New York before moving to Dave’s own newly relocated Galaxy Smith Studios in Brooklyn. Avowed fans of the Stop Making Sense film, they tapped Jerry Harrison of Talking Heads to produce standalone single “On The Run” and album track “If I Ever Fall Asleep” at The Bunker Studios.

“I’m extremely hands-on, so it was a growth experience to see someone else’s take on the band,” adds Dave. “Overall, Jerry made us as a band think about things we wouldn’t have otherwise. It was really beneficial.”

The group officially introduce the album with the first single and title track “Life In The City.” Funkified guitars wrap around otherworldly synths and rapturous horns as the words “Blind in the spotlight” glare.

“That line stands out to me,” Dave continues. “There’s so much stimulus in the city and in modern life in general. So much is going on. Light is constantly shined on what we do, how we act, social media, and the urban hustle and bustle that we’re blind to what’s really going on underneath. That line sums up what the song is about. We’re not able to take a breath and experience the simplicity of reality anymore. We forget to be who we really are.”

A collaborative effort with several band members, the swaggering cry of “Lady Lovely” tells an intergalactic horror story disguised as cross-species romance, complete with “creature” giggles from the song’s vocalist Josh Schwartz. Schwartz also co-wrote “If I ever Fall Asleep,” portraying the “paranoid ramblings of an insomniac holed up in his apartment.”

Punctuated by robust horns, “Superstatic” illuminates another side of Turkuaz as it touts lyrics “about letting go and having fun for a minute.” Meanwhile, on the more personal side, upbeat delivery and synth squeals underscore a poignant admission for Dave on “The One and Lonely.”

“It’s about kicking a lot of habits and stepping away from vices,” he admits. “The song highlights the struggle I had with substances and alcohol as well as the process I went through trying to shed the struggle. Drinking and drug use is a huge part of the road for most bands. It got to a point where it was too much for me though. This album documents me taking a step back and saying, ‘I want to live for a long time. I want to stop and take in what’s actually happening to me—not just party all the time.’”

It’s that honesty that has reinvigorated how far down the line the band has its sights set. And even in the midst of serious subject matter creeping in on this album, the musicianship of all nine band members and the group’s upbeat, fun-loving sensibility still shines through to give Turkuaz fans the joyous sound they’ve come to know over the last several years.

“I would love for our music to be a bright spot in an otherwise dark world,” he leaves off. “You can come to our shows, let go, exist, and have a good time in spite of what may be going on outside. That’s what music does for us. We want to share that.”

In this politically challenging era, it’s time to stand up against the machine. Brass Against is collective of artists, led and curated by Brad Hammonds, who share in the goal of creating brass protest music that calls fans to action. We want the music we perform to sound inspiring and resonate with people’s emotions, encouraging them to act. We combine rock and edgy hip-hop to play music that’s powerful and empowering. Brass Against is exceptional music with a political edge. We are angry, we are inspired, we are ready for change—and we hope our music amplifies this energy in everyone who listens.