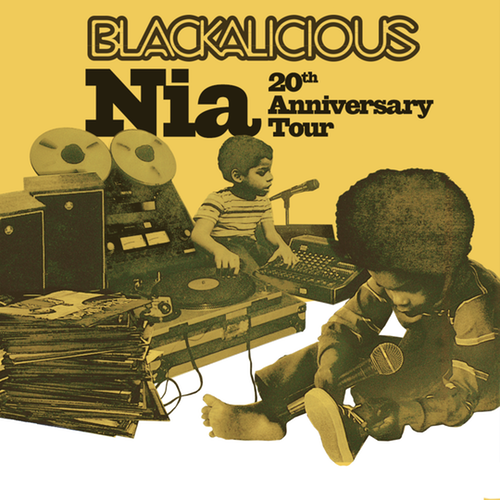 “We’re older, we’re wiser, we’re more mature,” MC Gift of Gab (nee Timothy Parker) says of Imani, Vol. 1, Blackalicious’ first new album in a decade. “It’s better now, because we’ve grown as people and artists.” “Each one of these records is a chapter in our lives, and we put our complete heart and soul into it,” agrees Gab’s longtime musical partner, CJ/producer Chief Xcel (aka Xavier Mosley). “We live these records.”

Imani, Vol. 1 lives up to the beloved California-bred duo’s hard-won reputation as one of hip-hop’s most progressive,
forward-thinking creative forces. Acclaimed for the sublime combination of Gab’s verbal dexterity and lyrical eloquence,
and X’s bracing beats and distinctive soundscapes, Blackalicious has earned widespread respect, both inside and outside of the hip-hop community, for the wildly inventive, personally charged innovations of its first three albums, 1999’s Nia, 2002’s Blazing Arrow and 2005’s The Craft.

Three years in the making, Imani, Vol. 1—the first of a projected trilogy to be released over the course of two years—is perhaps Blackalicious’ most ambitious and accomplished effort to date, maintaining the spirituality, introspection and positivity that are the twosome’s trademarks, while making it clear that their musical vision and creative drive remain as
strong as ever.