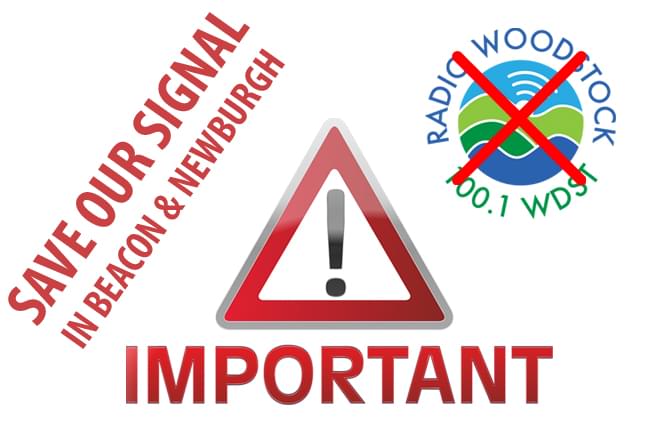 SAVE OUR SIGNAL IN BEACON AND NEWBURGH

HELP US SAVE OUR SIGNAL IN BEACON AND NEWBURGH. A LOCAL RADIO COMPANY HAS PETITIONED THE FCC (Federal Communications Commission) to override Radio Woodstock’s 100.1 frequency in the Newburgh Beacon area including Newburgh, Beacon, Fishkill, New Windsor, Washingtonville and Vailsgate and other towns. This will also affect our commuters traveling on the New York State Thruway between Harriman exit 16 and Newburgh exit 17. If this license is granted, Radio Woodstock will no longer be available in these areas. If you live, work or drive through these areas, we need your help to Save Our Signal in Beacon and Newburgh area.

Thanks again. We’re all in this together.

Here are other ways to submit your declaration:

You can also fill out the following Word Document or PDF

Scan & Email back to Live@radiowoodstock.com

Radio Woodstock 100.1 WDST needs you to act quickly! The FCC may rule at any time this month!

The Situation: On May 13, the “WWEL applied to build a new translator station for one of their AM stations that would re-broadcast its signal on the FM band at 100.1 FM.  If approved, this would clearly cause interference to listeners in the Newburgh – Beacon area including Newburgh, Beacon, Fishkill, New Windsor, Washingtonville and Vailsgate and other towns. It will also interfere in other towns along the New York State Thruway between Harriman exit 16 and Newburgh exit 17.  Radio Woodstock 100.1 WDST has been on the air at 100.1 FM since 1980 providing music, traffic reports, and information about local events.  We’re an independent, locally-owned station staffed by real live people who live in our area.  We have a big signal, but we’re not part of a giant group with no local ties.

We can ask the FCC to deny their request. If we can prove that Radio Woodstock 100.1 WDST has listeners who live, work, or even drive though those areas by gathering letters (“declarations”) they will likely NOT approve rebroadcasting by a new translator station on 100.1 FM.

How can you help? If you live, work, or often drive through the areas previously listed and listen to Radio Woodstock 100.1 WDST, we need to hear from you! We need letters with some specific information (a “declaration”) to the FCC saying you listen to us, where you listen, and asking the FCC not to approve the application for a translator station on 100.1 FM.

How is this legal? A. Recently the FCC has allowed AM stations to apply for “translator” stations to re-broadcast their signal on FM.  They can apply to do this even where they would possibly interfere with already existing stations who already have listeners in the area.  It’s up to the station who would be interfered with to prove this would be a problem for their listeners.  Although the translator program was designed to help out small daytime only AM stations in rural areas, many stations are applying for these all over the country and in more heavily populated areas where interference is much more likely to be an issue.