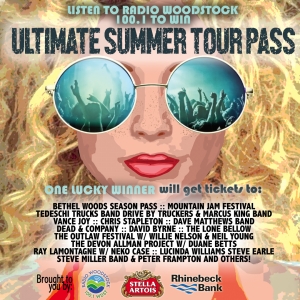 Lynyrd Skynyrd, Poison with Cheap Trick, 311 & The Offspring with Gym Class Heroes, The Beach Boys, Steely Dan and the Doobie Brothers and more!

NO PURCHASE NECESSARY TO ENTER OR WIN.

A PURCHASE WILL NOT INCREASE YOUR CHANCES OF WINNING.

PREVIOUS WINNERS ARE NOT ELIGIBLE.

The Contest begins on May 1st at 6:00 a.m. Eastern Time (“ET”) and ends on May 31st at 7:45 p.m. ET (“Promotion Period”). The time shall be determined by Station’s timekeeping systems. Station shall have the sole discretion in determining the timeliness of any action or inaction related to this Contest. All times mentioned in these Official Rules are Eastern Time unless expressly noted otherwise.

Open only to legal U.S. residents who are 18 years of age or older.  Employees of Radio Woodstock 100.1, their respective affiliates, subsidiaries, advertising and promotion agencies, prize suppliers, including any vendors providing services in connection with this Contest (collectively, the “Station Affiliates”) and the immediate family members (spouse, mother, father, in-laws, grandmother, grandfather, brother, sister, children and grandchildren) and/or those living in the same household of Station personnel or Station Affiliates are not eligible. By participating, entrants agree to be bound by the Official Rules and the decisions of Station.

WINNER SELECTION: Winner will be selected on or about May 31st, 2018 by random drawing from all eligible on-air qualifiers and online qualifiers. Decisions of Station are final on all matters. Limit one prize per person and per household address. Odds of winning will depend upon the number of eligible entries received.

Prizes are Not transferable except for Bethel Woods Season Pass

State or Federal Photo I.D. required when claiming prize. Only the name of the winner on the prize sheet may obtain prize.

Winners are responsible for all taxes associated with prizes. Social Security Card and Driver’s License are required for cash prizes and prizes in value over $250.00.

Prizes are held for 30 days or until the last business day before an event’s date.

Station assumes no responsibility for technical difficulties during station contesting including telephone malfunctions.

Prizes not claimed after 30 days will be re-distributed at Station’s discretion.

Radio Woodstock assumes no liability due to circumstances beyond our control; including but not limited to: prize provider going out of business or being sold, cancellation of event, or out of stock, discontinued items.

Any prize may be substituted with a prize of equal or greater value at the discretion of Statioin. Winner is liable for any taxes, tips or other miscellaneous charges associated with the prize.

All prizes involving reservations such as airfare, lodging, shows or side attractions, must be made by winner, unless otherwise advised by radio station.

All winners agree that by accepting a prize, they consent to the broadcast or promotion of their name, voice, and/or photo by station either on-air, on station website, or in television or print advertising.

Individuals are only allowed to win one prize over $100.00 in value within a 30- day period.

Station reserves the right to cancel a contest at any time. Any and all rule changes will be announced, and written copies made available at our offices as soon as changes are made.

Copies of all rules are available during business hours at our offices. These rules may be changed at any time at the discretion of the Station.