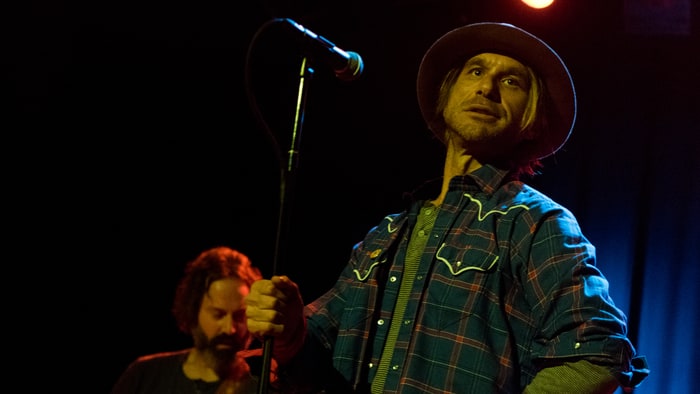 According to the album’s liner notes, written by Snider in an offbeat, Kerouac-worthy ramble, Eastside Bulldog was largely improvised during a pair of live recording sessions at a Nashville-area music academy. Snider had already played a handful of local gigs with Elmo Buzz and the Eastside Bulldogs, an informal side project launched several years ago, when producer and multi-instrumentalist Steve Fishell offered the songwriter some free recording time. The catch? The sessions would be attended – and funded – by a group of students who’d forked over an admission fee to watch the creation process.

“Not having any songs,” Snider remembers, “and being drunk and stoned, I rallied up a bunch of Bulldogs, a case of red wine, a grocery bag of grass, and instead of recording a song I wrote, I got the band all tanked up, we got the students all tanked up, and just like our gigs, I made up a bunch of songs.”

Written and recorded on the spot, “Ways and Means” swaggers forward with all the wobbling confidence of a tanked man who doesn’t yet realize he’s had one too many. Snider’s stream-of-conscious narrative namechecks a number of East Nashville institutions, from shuttered dive bar the Alley Cat Lounge to local songwriter Warren Pash, who famously wrote Daryl Hall & John Oates’ “Private Eyes.” It’s far from perfect, and that’s the point. Arriving on October 7th, Eastside Bulldog offers much of the same, shining a light on a songwriter whose rough drafts can rival most people’s final edits.