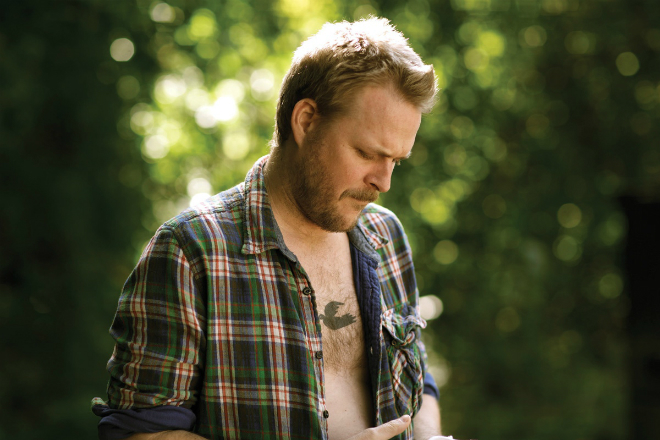 There is no tension in the sound of “Biloxi.” The coppery lope and jazzy phrasing of M.C. Taylor’s guitar sparkles like sun on choppy waters, steered by Phil Cook‘s blithe dobro and Matt McCaughan’s hand percussion. It feels like an invitation to untuck your shirt and recline in a frayed cane chair drinking beer until summer dims, not dropping out, but taking stock. That’s pretty much what’s happening in the first song to be released from Hiss Golden Messenger‘s sublime new record, Heart Like a Levee. It’s Taylor’s kid’s sixth birthday, and “everybody in the whole damn place has gotta have a good time.” But that can put a lot of pressure on a solitary soul. “All around my old hometown, I was known as a loner,” Taylor sings in his wistful drawl, before soaring, “You know, I wasn’t lonely, I just liked being alone.”

Over six albums, Taylor has documented the ways that love and family incrementally recalibrate a life. Meeting his wife made everything seem easy; fatherhood and responsibility made it “hard to be easy now,” he admitted on “Mahogany Dread” from 2014’s beautiful and underrated Lateness of Dancers. On “Biloxi,” faced with his child’s future, he traces how his own nature has changed: his relationship with the “mighty word,” the perspective he accrued in harder towns, and how fear can shape a life, too. “It’s hard, Lord/Lord it’s hard,” he sings on the chorus. His band roar the words behind him, like revellers just out of focus. Taylor, though, doesn’t sound anguished, but accepting. “Biloxi” isn’t Don Draper at Sally’s birthday party, freaking out as he realizes everything he’s lost. It’s the understanding that sacrifices worth making don’t feel like sacrifices at all.