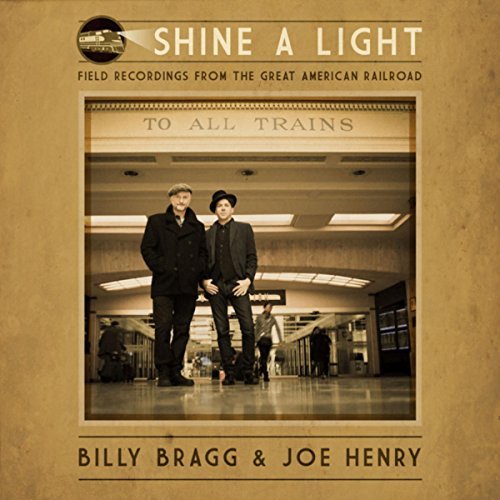 The great railway journey, that staple of mid-evening TV, has just morphed into an album, a tour and a chunk of pop mythology.

Earlier this year, Billy Bragg and American singer-songwriter Joe Henry took a 2,700-mile train ride across the US, from Chicago to Los Angeles, along the way recording songs that reflect the railroad’s impact on the nation’s social and cultural life. Woody Guthrie’s Hobo’s Lullaby, for example, was captured at an Amtrak station in Alpine, Texas, the folk ballad Railroad Bill at St Louis Gateway station, while the pair crooned Hank Williams’s Lonesome Whistle in their sleeping berth near Whistle Junction, Missouri. By the end of their 65-hour trek they had an album.

Last Wednesday, Shine a Light was given its debut at St Pancras Old Church, a much-restored medieval pile nestled alongside London’s Eurostar terminus. Its icons and plaster saints provided an incongruous setting for a muscular chronicle of North America’s railway age, but its intimacy proved perfect for the semi-acoustic charms of Bragg and Henry. They make a contrasting pair; Bragg the blue-collar Anglo troubadour, Henry a dapper American writer and producer whose home studio has hosted clients from Aaron Neville to Rodney Crowell. Their voices prove a complementary blend, Bragg’s lowering Essex moan cut through by Henry’s higher, acerbic tones, while both men know how to make a guitar drive and ring.